Polling stations opened today at 7 AM, and voting is underway across the country.

According to the General Election Commission, there are a total of 2,151,329 eligible voters registered to vote for the 2021 presidential election, with 110,773 people marked as absent or ineligible. Polls in the election are open until 10 PM today, and a 100 percent manual count will be conducted in all 2,087 polling stations. 43 observers from foreign and international organizations and 40 journalists from media outlets have registered to observe the election.

The 25,619 voters who were unable to visit the polling station by themselves cast their vote through sealed mobile ballot boxes yesterday, and the ballot papers have been put into voting machines as the polls opened.

As for Mongolian nationals residing in foreign countries, they cast their vote on May 30-31 at 44 diplomatic missions of Mongolia in 30 countries around the world. A total of 7,394 were registered in advance to vote for the election, and 76 percent of them or 5,618 people cast their votes.

The General Election Commission reports that the voter turnout was 23.46 percent on the national level as of 2:30 PM. More specifically, of the total voters on the national electoral register, 474,888 have cast their vote in the first 6 hours of the 2021 presidential election.

The 2021 Presidential Election of Mongolia is being organized within the framework of the Government's temporary regulation on prevention of COVID-19.

A preliminary discussion under the theme ‘Mongolia - Green Development’ for the 26th...
1 час

On October 12, Prime Minister L.Oyun-Erdene held a virtual meeting with Premier of the...
8 дня

On August 28, Prime Minister L.Oyun-Erdene took part in a joint public and...
51 дня

The Bogdkhan railway project was launched today, on August 23. The government of Mongolia...
57 дня

In this edition of the series ‘Mongolian Fine Art Masterpieces’ brought to you by...
104 дня

At an irregular meeting today on July 2, the Cabinet has made the decision to cancel this...
111 дня

The 6th President of Mongolia Ukhnaagiin Khurelsukh was inaugurated in the Great Hall of...
118 дня

At its regular meeting today on June 16, the Cabinet has resolved to organize the...
127 дня

At 7:30 AM today, Presidential election candidate from the ruling Mongolian People’s...
134 дня

Prime Minister of Mongolia L.Oyun-Erdene has cast his vote at the polling place stationed...
134 дня
Previous Next

"Renewable energy sources in Mongolia will be urgently increased" 1 час 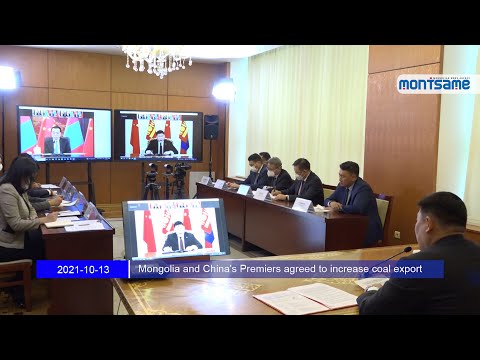